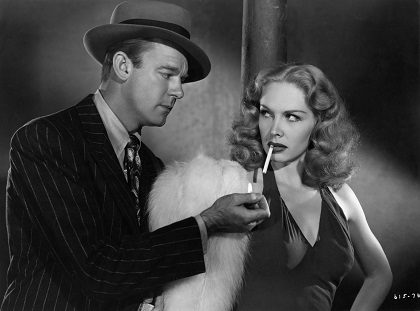 Detroit makes a cameo appearance in this film noir gem. Director Mann and his director of photography, John Alton, pull out all the stops in relating this intensely exciting and vivid tale of U.S. treasury agents, led by the redoubtable Dennis O’Keefe, going undercover to infiltrate a gang of counterfeiters. Great character turns by a mercilessly brutal Charles McGraw and a sweaty Wallace Ford are given added heft from a script by John C. Higgins.

Harry Mitchell (William Gargan) is your typical hardboiled noir newspaper columnist, eager for a front-page scoop and willing to do anything to get it. When he gets a hot tip from a rival about “The Argyle Album,” Mitchell risks life and limb to find it, tangling with a rag-tag band of nefarious treasure hunters determined to steal the book and the scandalous secrets it contains. A tongue-in-cheek parody of The Maltese Falcon, The Argyle Secrets shows fledgling writer-director Endfield playfully exploring all sorts of cinematic chicanery.

Noir City: Detroit 2022 is sponsored by the Knight Foundation (https://knightfoundation.org/)

PLEASE NOTE: TCM host Eddie Muller will not be introducing these films because of illness.

A note from Eddie Muller, our Noir City Detroit host this weekend:

I greatly regret not being able to return to the Redford this month, to enjoy being with terrific fans for a long weekend of noir. Some recent health issues hit me out of the blue, and while not life-threatening, doctors have advised me not to push it and to avoid traveling for a while. Sadly, I have reached the age where I listen to doctors and heed their counsel. I hope everyone enjoys the program John Monaghan and I assembled, and I promise I'll be back next time to enjoy another great lineup of films in this wonderful venue.

The Redford family wishes Eddie Muller the speediest of recoveries as we look forward to his return to Detroit next year. The show will go on, with eight great films in four double features, but without the VIP reception on Saturday. If you have bought the weekend pass, we are offering a $10 refund if requested when you pick up your lanyard. Weekend passholders still receive an exclusive Noir City Detroit poster and admission to all eight films.

The Way Movies Were Meant To Be Seen